Home » The No Respect Customer

The No Respect Customer

A lot of readers have asked what to do about customers who don’t seem to respect who they are or what they do. “Frustrated” in Ontario wrote:

“I find a lot working in my field of work (Hardware) that the men that come in do not seem to think we women know anything and would rather talk/deal with the guys that work here. I find it degrading and very frustrating…”

It’s hard to keep your morale up when you feel that the people you are trying to look after have no respect for you – particularly when you know you’re doing a good job. Sometimes, as in the letter above, it is a prejudice issue, where an individual makes unfair assumptions based on race, gender, age, etc. Sometimes it’s just someone who simply takes service people for granted. Sometimes it’s just plain arrogance.

This is a tough one to deal with, because there’s no real solution in some cases. It’s unrealistic, for example, for you to expect to change a customer’s long-held prejudices and beliefs. You could chastise and scold them, of course, but other than the brief moment of satisfaction it would bring you, the outcome would never be positive. You are really only left with the two choices outlined in the oft-quoted serenity prayer: Change the things you can; and learn to accept the things you cannot change.

One of the most useful methods for learning how to accept behavior thatyou can’t change is by reframing. Reframing is learning how to look at a behavior from a different, more palatable, angle. It doesn’t change the behavior, or make excuses for it. It simply gets you looking at the same thing from a different perspective. An analogy would be that of getting fired. You could think, “I’ve just been fired – how am I going to feed my family?” Or, you could reframe it to think, “I’ve just been fired – now I can find a job I’ll enjoy more!” Same situation, and both statements are true. It’s just that the second way of looking at it doesn’t upset you quite so much.

As it applies to respect, you may think that “Jane doesn’t respect what I do.” Obviously, as long as you think of Jane as someone who doesn’t respect what you do, you’re going to view Jane in a poor light. But what if you reframed it to “Jane doesn’t understand what I do?” The first views Jane as attacking your character, while the second views Jane as being uninformed. The reframed version makes it easier to look Jane in the eye.

The other thing it does, is provide you with a possible strategy for changing the behavior over time. Gradually and subtly, try to give your customer a little more insight into what you do. You never know how their attitude might change.

No guarantees on this one, but it’s worth a try! 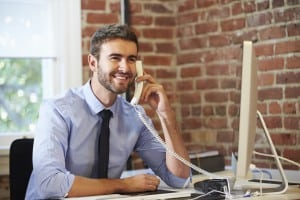